Ciao da Bologna! I’m currently a CISB student studying abroad in . I have been here for two months already and plan on staying in for a full year (Academic and Calendar). The experience so far has been great at times and not so great. When I first arrived one of my roommates picked me up at the airport and brought me back to my apartment. This was great. What was not so great was that he told me I was going to be alone for five days. I was shocked. What was I supposed to do for five days by myself? I had initially been so excited to go to that I never really thought about what I would do once I got there. It finally started to sink in that I was not going to see my family or friends until Christmas, and after that one trip not until August 2008. Luckily I had a friend in that arrived a week earlier and 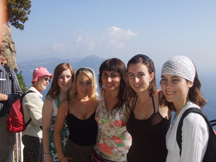 she hopped on a train and came to the following day to keep me company. As the days went by I started to feel more and more comfortable in this strange city that was now becoming my home.

After about two weeks of being in by myself one of my roommates arrived and it was great. I was so happy to finally have somebody to talk to! Unfortunately we started talking in English, not Italian, and to this day we still talk in English. It’s not helping me learn Italian at all, and I know I need to stop speaking in English. This is something that I do not recommend. Try as hard as you can to start speaking in the language you came to learn because after two months, my Italian is only slightly better than what it was when I came here. My listening comprehension has gotten much better but my speaking skills are still not that great. It’s extremely frustrating not being able to speak the language as well as you would like to. It kind of makes you a different person than you were at home. At home I could really talk to anybody but here I’m seen as a shy, quiet exchange student. I know the change will come and I’ll start speaking the language more and more, but it is a much slower process than I imagined.

One of the nice things about is that there is an Erasmus Student Network. For those of you that don’t know the term Erasmus, I’ll explain. Erasmus is the name given to all European exchange students that study in . The Erasmus Student Network is a volunteer organization that is present at most Universities in and they plan trips and activities for the exchange students to get to know one another. I have met some amazing people from all over the world by participating in their events and just last night I got back from a four day trip to . The experience has been one of the best one’s so far. I went with my two friends from the that I met through a language course and met students from all over the world. I got to share a room with girls from , , , and . One thing that continues to surprise me is about everyone on exchange knows English. I knew that a lot of people learned English in school, but I guess I never imagined quiet so many to speak it so well.

So I think I’ve given a decent update of the last two months in and right now I must go to my Contemporary Italian Literature class (which is in Italian as well) and try to learn as much as I can. I will write more about the Italian school system later and how incredibly different it is from the . Ciao Ciao!