It’s not often the grand prize entry in a showcase is kept hidden under a sheet. Then again, you wouldn’t take modesty into account at a hospital while trying to solve a sensitive medical issue like poorly inserted urinary catheters. That’s where the innovative—and hyper-realistic—training prototype from bioengineering student Alyssa Schul comes into play. The CREST Urethral Catheter Simulator earned her the $1,000 Premera Grand Prize at the 2020 Science and Technology Showcase at the University of Washington. Judges also awarded Schul a $100 Davis Wright Tremaine Best Communicator Prize at the 14th annual competition co-hosted by the Science and Engineering Business Association (SEBA) and the Foster School’s Buerk Center for Entrepreneurship. 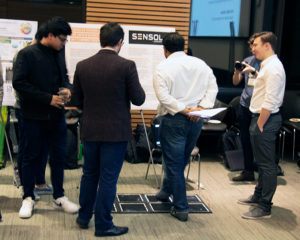 This year’s event featured 18 finalist teams from a record pool of applicants. The annual showcase shines a spotlight on science- and technology-based innovations coming out of the University while providing students with the opportunity to pitch their commercial potential. Seattle-area entrepreneurs and investors served as judges and provided in-person feedback and mentorship.

Following the showcase was a campus-wide networking event with more than 100 students looking to form teams, recruit members, or develop their ideas ahead of the Buerk Center’s student competition season. Many of the STS competitors and the teams formed at the event are expected to compete in the Hollomon Health Innovation Challenge on March 5, the Alaska Airlines Environmental Innovation Challenge on April 2, and/or the Dempsey Startup Competition (Formerly the UW Business Plan Competition) in late April and May.